Introduction: The use of geometric description of anatomical regions has historical, medical and surgical support and is important for the precise location of anatomical structures. This is useful for both the theoretical study of human anatomy as well as the practice of anatomical and surgical dissection. Triangles have gained a lot of evidence because they are delimited by few structures, facilitating their location. There are many of them, very important to medicine such as the cystichepatic (Callot),
inguinal (Hesselbach) and femoral (Scarpa) triangles. This study describes the Romboesplenioescapular Triangle that is made up of the splenius capitis muscle, levator scapulae muscle and rhomboideus minor muscle and its medical-surgical importance. It is important to note that, to date, the Romboesplenioescapular Triangle has not been found or demonstrated in any anatomical or medical literature searched. The nomenclature follows the standards of the International Anatomical Terminology and does not use eponyms. Objective: To describe the Romboesplenioescapular Triangle, an anatomical geometric space, and its relation to the dorsal scapular artery, accessory nerve and dorsal scapular, and to consider its anatomical significance for medical and surgical applications. Method: Anatomical dissections were performed in 40 adult cadavers and 3 human fetuses, made available in the laboratories of Anatomy and Embryology at the Universities UNINCOR-BH, UNEC-CARATINGA, UNIVAÇOIPATINGA, UNIVALE-GV-MG-dentistry. This study examined the relationship of the dorsal scapular artery with the dorsal nerve of the scapula and the accessory nerve within the  Romboesplenioescapular Triangle. The cadavers and fetuses were divided into 2 groups according to the anatomical access to the Triangle. In Group 1, with 20
adult cadavers and 3 fetuses, with 46 sides dissected, access was achieved by folding the trapezius from medial or vertebral to lateral or scapular, and in Group 2, using 20 cadavers, with 40 sides dissected, access was by lateral or scapular folding to medial
or vertebral. Results: The Romboesplenioescapular or Dorsal Scapularis Triangle was observed, on both sides of the upper dorsum, in all 40 dissected human cadavers and 3 fetuses. In the cadavers, the measurements found in relation to the triangle were:
the base formed by the rhomboideus minor muscle presented measurements 3.4 to 4.0 (3.70 ± 0.30) cm; the lateral edge with its delineation formed by the levator scapulae presented measurements 8.3 to 9.0 (8.65 ± 0.35) cm; and the medial edge 16 access formed by the splenius capitis muscle was 4.2 to 5.0 (4.60 ± 0.40) cm. Variations in the accessory nerve, not studied in fetuses, were found only in relation to
its position near the levator scapulae, present on 72 sides (90%) covering dorsal and caudal in contact with the dorsal surface of the levator scapulae muscle. On 8 sides (10%) there was a displacement to a position out of the lateral edge of the levator scapulae muscle. On these same 8 sides (10%) it was observed that the dorsal nerve of the scapula was also displaced laterally along the lower lateral angle of the Romboesplenioescapular Triangle. Regarding the dorsal nerve of the scapula which was not studied in fetuses, it was observed that on 72 sides (90%) this nerve was found in the mid-lateral position within the Romboesplenioescapular Triangle. On 8 sides (10%) it was found laterally near the inferior lateral angle of the triangle next to the dorsal scapular artery. As to the origin of the dorsal scapular artery which was also not studied in fetuses, variations found were: on 42 sides studied (52.5%) this artery originated from the transverse cervical artery, a branch of the thyrocervical trunk; on
32 sides (40%) it originated directly from the subclavian artery. On 6 sides (7.5%) it originated directly from the suprascapular artery, but in all the cadavers and fetuses it occupied the angle of the Romboesplenioescapular Triangle. Conclusion: The
anatomic description of the Romboesplenioescapular or Dorsal Scapularis Triangle proved that it is a defined anatomical space and structure that is present in all human bodies studied, regardless of gender or age. Its content which includes the dorsal
scapular artery, the dorsal nerve of the scapula and its relationship with the accessory nerve proves its importance in medical and surgical practice. 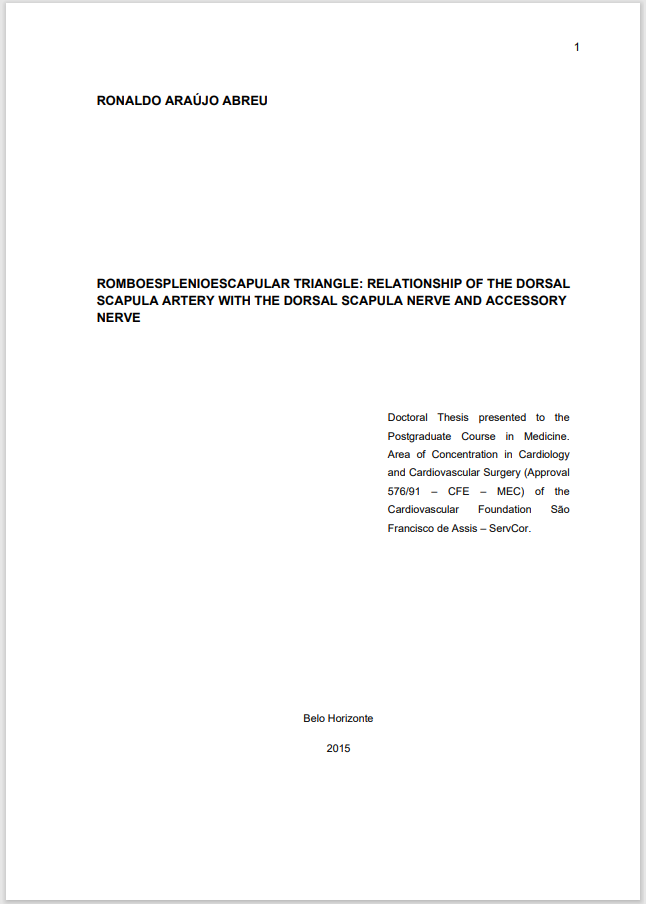